Steel and raw material prices
Since about 2005 the key issue in the steel industry has become the availability and price of raw materials - iron ore, coking coal and scrap.

Demand from China drove the markets for iron ore and coal into tightness and the highly concentrated structure of the internationally traded markets for both products enabled prices to be raised to high levels, transferring profits from steelmakers to raw materials suppliers in the short term.

Because of steel's strong position in its applications, those price increases could generally be passed on to customers after some time lag, so that the steel producers restored or even increased their profitability without losing volume to other materials. 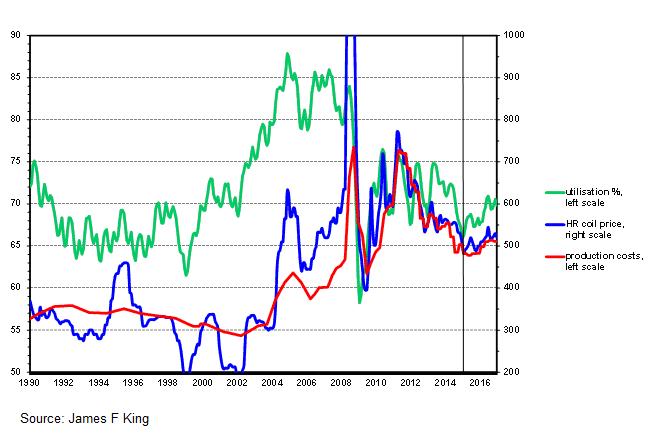 The chart shows that the trend of prices follows the trend of production costs, such that prices have risen in line with the costs of production in the high-cost period since 2005. It also shows that in the short term the price moves around the trend in response to levels of capacity utilisation, which are themselves driven by short-term changes in steel consumption. A period of sustained high capacity utilisation in the industry from 2005 eventually caused an extreme tightness in the market for steel and the price spike of 2008. The severe economic downturn in 2009 brought capacity utilisation and prices down to much lower levels. Since 2012 prices have moved closely in line with average production costs. Production costs themselves have become more variable over the short term as the pricing of raw materials has moved from an annual to a quarterly or shorter basis, with much greater influence of spot market conditions on those prices.

Our view is that this pattern will continue in the future, with the trend of prices continuing to depend on the underlying level of production costs for steel products. That will in turn depend on physical availability of iron ore and coal resources and the long-term trend in prices of energy, labour and capital equipment. Prices will fluctuate widely around that trend in response to short-term changes in steel consumption.

Production costs for steel rose very rapidly in 2008 because of high spot prices for iron ore and coal at that time. The response to high prices for those materials has been threefold.

Of the two main materials, coking coal is the one with the most problems of available resources. Deposits of high-grade coking coal are believed to be limited and the capital, operating and transport costs of those deposits are high. This is likely to mean continued relatively high prices for good quality coal. This will drive the search for methods to reduce the use of coke, such as pulverised coal injection (PCI) on all new blast furnaces and retrofitting of existing furnaces. It will be one factor encouraging the use of the electric steel process in place of integrated steel.

Iron ore, on the other hand, has large resources potentially available to be mined. This includes major reserves in the existing largest producing countries, Australia and Brazil; as well as new resources to be developed in West and South Africa and elsewhere. Several factors will affect the future development of iron ore. These include:

The price of steel scrap tends to be determined by the prices of iron ore and coal, since the price of those materials determines the production costs of companies using them and therefore sets the baseline of prices with which scrap-based producers must compete. This meant high prices for scrap after 2005, prices far above the cost of collection and processing. Scrap prices were slow to fall from the peak levels, as demand for traded scrap was increased by the levels of steel production in China.

The wide gap between the price of scrap and the cost of collection and processing suggests that steelmakers could reduce costs by setting up their own scrap operations. Some steel companies have such operations, but it is not clear that those result in improved cost competitiveness for the companies. This is because those at the bottom of the supply chain for scrap (demolition contractors, manufacturers, car scrap yards, street collectors etc.) know the market value of their scrap, so scrap companies are not able to buy at low prices. There is also the added complication that a scrap company must also handle scrap in other metals (aluminium, copper, etc.,) because those metals come with the steel scrap that is collected.

Steel scrap is extensively traded between countries, the main flows being from the USA and northern Europe to southern Europe and the Far East. China has only a relatively small proportion of its steel produced from scrap in the electric steel sector, but its demand for scrap has been an important factor in tightening the international scrap market. It is likely that China will increase the proportion of production from electric steel as the country's availability of domestic scrap increases. If the growth of that sector is out of step with the development of domestic scrap supply, the demand for imported scrap could from time to time disrupt the international scrap market.

Scrap is regarded by some countries as a domestic resource and when the market is tight governments can be persuaded to ban the export of scrap to protect the domestic steel industry. This type of disruption can also be expected from time to time, making dependence on the long distance transport of scrap a risky strategy for steelmakers.